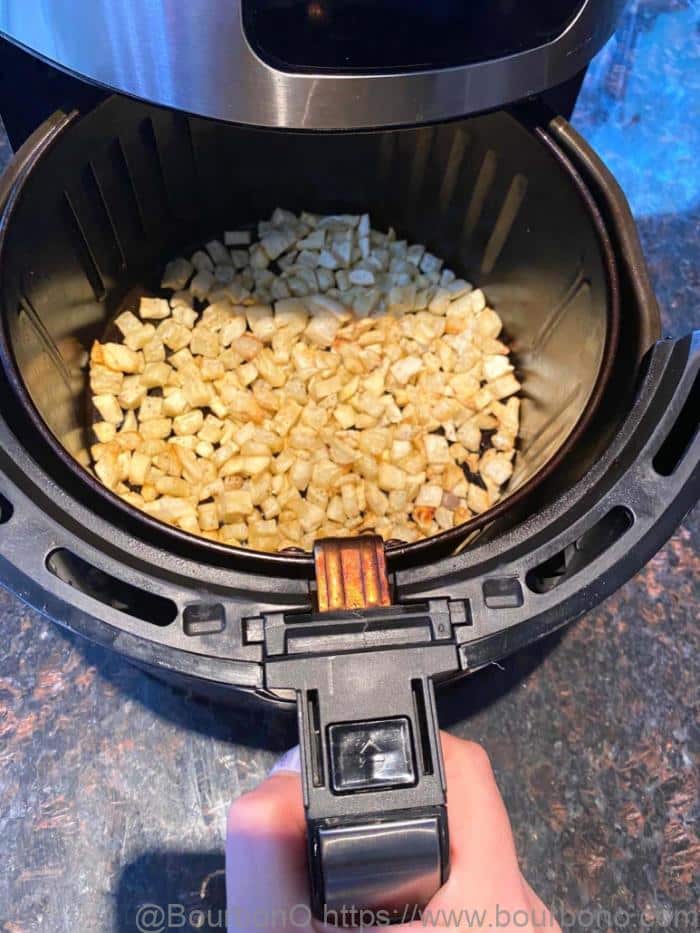 How to cook frozen diced potatoes in the oven without them being burnt or undercooked requires some understanding about baking time and temperature. As easy as this process may seem, you need to pay close attention to the color of the potatoes, as this will indicate their doneness. Keep on reading to know more useful tips about cooking frozen diced potatoes.

What is frozen diced potatoes?

Frozen diced potatoes are already pre-cooked and finely diced before being put in a frozen state. These dices will save you lots of time preparing meals, especially in busy kitchens. Most importantly, they provide a uniform consistency all year round and have a long shelf life. These potato chunks can be used in gratins, soups, stews, or other potato dishes.

Step 2: Bake the diced potatoes following one of the methods below:

Arrange the frozen diced potatoes on a non-stick baking tray (you don’t need to thaw them before baking). Make sure the potatoes are formed in a single layer to cook evenly—Bake at the same cooking temperature for about 10 minutes.

Some people want the crispness of their frozen potatoes to be more apparent. Cover the baking sheet with a touch of olive oil for this to work. Then transfer the baking tray with potatoes in the oven and heat up for about 5 minutes or under.

After that, arrange the frozen potatoes on the baking tray and let the potatoes coat in hot oil. Be careful as the tray is still hot. Bake for approximately 25 – 30 minutes. You can also tell they’re cooked through when they’re lightly browned. Remember to turn the potatoes around halfway through cooking time.

Step 3: Serve your baked diced potatoes immediately as breakfast or a tasty side dish. Diced potatoes also pair well with some salad or sauce.

Cook diced potatoes on the stove

Step 1: Heat up cooking oil over medium-high heat in a large skillet. The oil needs to be preheated in an uncovered skillet.

Step 2: Add frozen diced potatoes to the preheated oiled skillet. Spread the potatoes and make them form into a single layer to cook more evenly. Fry each side of the potatoes for about 4 minutes at 350-degrees F (or 175-degrees C). The total cooking time is about 8 minutes.

Step 1: In a bowl, mix your desired amount of frozen diced potatoes with pepper, salt, and oil. Add a little olive oil to your cooking tray’s surface or air fryer basket. You can also opt for the cooking spray to substitute olive oil.

Step 2: Arrange the potatoes in an even layer. Then bake at 400-degrees F (or 200-degrees C) for approximately 12 minutes.

Step 3: Flip them to the other side and bake for another 8 – 10 minutes. Bake the potatoes longer if you want to enjoy a less crispy texture.

Step 1: Pour out the number of frozen potatoes you want. Then form a single layer of the potatoes on a microwaveable plate.

Step 2: Cook the potatoes in the microwave on full power for approximately one minute. After each minute of cooking, remember to give the potatoes a shake.

Step 3: Microwave the potatoes for approximately 10 minutes in total.

Related post: How long to cook pork tenderloin in the oven at 400 degrees Fahrenheit?

Tips for cooking frozen diced potatoes in the oven