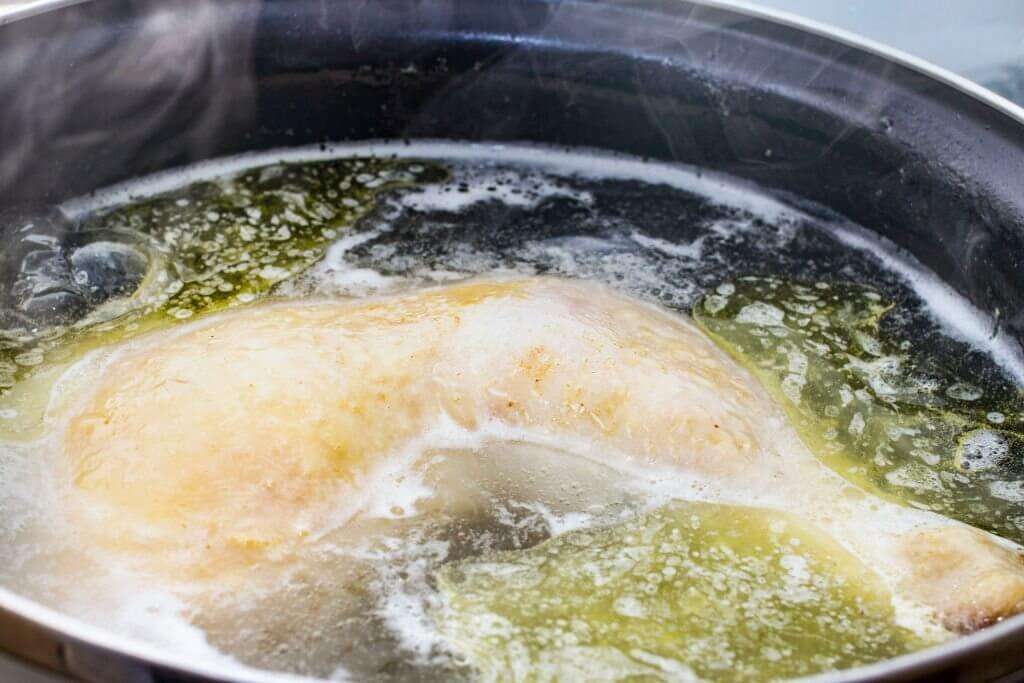 That white stuff coming out of chicken when you cook is coagulated protein. When protein is denatured by heat, it thickens and forms a gel.

A popular opinion is that the gooey white stuff coming out of chicken is caused by overcooking it on high heat. Is this true? We’re going to find out in this post.

White stuff coming out of chicken? – What does it mean and what to do

A perfect analogy for protein coagulation caused by heat is cooking the albumen of eggs. When cooking eggs, you will often notice that the albumen (the protein-filled part) thickens and changes texture from a semi-liquid to a solid form. This happens when the protein in the chicken you are cooking comes in contact with high heat.

This phenomenon often happens with frozen chicken rather than fresh ones because freezing can lead to cell damage, causing the protein molecules to break down faster and consulate when in contact with high heat.

Coagulation of proteins usually starts at a 38°C temperature and is completed between 71°C and 82°C. So what can you do when you see this white stuff seeping out from your chicken? Although this whitish secretion may be unsightly for some, it isn’t harmful; therefore, you do not have to throw the chicken away. Instead, here are some things you can do:

What is the yellow stuff on raw chicken?

If you’re sure this yellow stuff isn’t discoloration and isn’t oozing a foul odor, it is chicken fat.

It is safe and perfectly normal; it shouldn’t pose any need for concern.

This yellow fat is often accompanied by darker-colored meat. A piece or pieces of chicken with yellow fat often result from a pasture-fed diet. Here’s the rationale behind this.

When chickens are allowed a pasture-based diet (worms, grass, bugs), the high-in-chlorophyll grass often have beta carotene in abundance, an orange-colored carotenoid that gives the chicken fat its yellow color. Beta carotene is also responsible for brightly-colored yolks in pastured eggs.

If chicken is white, is it cooked?

What parts of the chicken is white meat?

These chicken parts are often mildly-flavored and can quickly lose moisture if overcooked.

Dark meat cuts of chicken have more myoglobin, resulting in their redder color. Dark meat chicken cuts include the chicken drumsticks and thighs.

Good chicken vs. Bad chicken – Differences and what to look out for

When chicken goes bad, some signs sets it apart from good chicken. So what are these signs that make them different?

If you are unsure whether your chicken is bad, the tabular guide above will help you.

How to remove the vein from chicken tenders