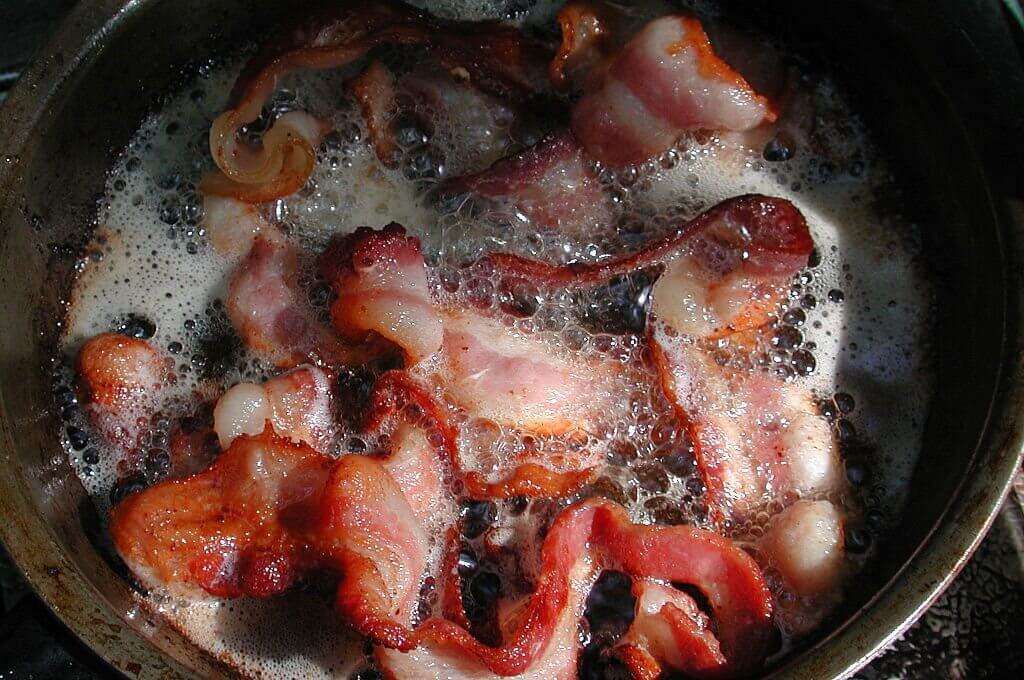 Bacon is a big part of the non-vegan diet.

If you’re an avid meat-eater, you’d have attempted to make some bacon at home. While trying to make bacon at home, you’re not alone if you often struggle to tell when bacon is done.

Unfortunately, there’s a lot of conflicting information online about how to tell when bacon is done; we’re here to change that.

So how do you tell when bacon is done? It’s easy. Bacon is considered wholly done when the color changes from pink to brown, and the fatty layers shrink.

Find other features that help you tell when bacon is done as you read on.

Look out for these details, and then you can tell when bacon is done

When bacon is raw, it is often pink, with white stripes of fat, but as it cooks, it changes to brown. However, if it is too brown, it will most likely taste bitter as it has overcooked.

If you like your bacon rare, you should let it cook till you can lift it from the pan without it dropping; this doesn’t mean it’ll be risky and well done. However, it would be best to give it some time to avoid food poisoning.

If you’re ‘team well-done’ bacon, your bacon should be crisp but not burned. You can check the texture with a spoon instead of your fingers so you don’t hurt yourself. If the bacon is still pretty soft, let it cook but keep a close eye on it to avoid burning it.

When bacon is cooked, it loses the slimy feel it had when it was raw and becomes dry. This dryness is a result of the loss of moisture as it boils.

The loss of moisture that occurs as you cook bacon causes bacon flesh to shrink and the fat to render.

How to know when to flip the bacon

Flip the bacon a little over halftime when cooking. Here’s what we mean. If your bacon recipe says to cook for six minutes, cook one side for about four minutes and flip, then cook the other for about two minutes for a well-cooked texture.

Does bacon need to be cooked?

Consuming bacon raw is unsafe because you’d be at risk of developing foodborne illnesses. If you scroll up a bit, you’d see that we mentioned some of these illnesses.

It wouldn’t be a good idea to experience avoidable illness, now would it?

How cooked does bacon have to be?

Safely cooked bacon can be anywhere from medium-rare to well-done. As long as your bacon isn’t undercooked, you are good to go.

Rare bacon is a type of cooked bacon that is barely cooked. Rare bacon is often cooked for a short time and is unsafe for consumption because it is still raw. Rare bacon is still pinkish, and its fat layers barely shrink or melt.

Medium-rare bacon is perfect for you if you don’t like well-done meat. In this case, the bacon has begun to fade to a light brown color but not entirely, as the pink color is still a bit visible. Medium-rare bacon poses fewer health risks than rare bacon.

Well-done bacon is thoroughly cooked bacon but not burned. It is light brown, and the fat layers melt and shrink entirely. Well-done bacon looks shriveled and crispier than medium-rare and rare bacon, as it is a bit dryer because of moisture loss.

What temperature does bacon need to be cooked to?

Pork cuts, including bacon, should have an internal temperature of 145°F with at least a ten-minute resting time before it is considered safe to eat.

Can you use a meat thermometer for bacon?

Importance of checking to see if bacon is done before eating

It is essential to check if bacon is cooked before eating, so you don’t risk developing certain foodborne diseases.

Eating bacon raw or undercooked makes you at risk of developing foodborne illnesses like trichinellosis, toxoplasmosis, and taeniasis.

It is okay to eat medium-rare bacon, but any bacon rarer than medium-rare is undercooked and should be avoided.

Another thing you probably didn’t know is that both extremes of the doneness spectrum are unhealthy for you with bacon. Just like undercooked bacon, overcooked bacon is also bad for you.

Eating overcooked bacon exposes you to harmful compounds like heterocyclic amines and polycyclic aromatic hydrocarbons formed when the bacon is overheated and burned. These compounds are carcinogenic, meaning that they can potentially cause cancer.

How to cook bacon in the oven

How to cook bacon on a grill

Thick bacon is the best for a grilled-bacon recipe. Using regular lightweight bacon will have them sticking to the grill, and who wants that?

How to precook bacon a day before serving

How to know if bacon is still good

Asides checking the expiration date, look out for the following:

When bacon starts to go bad, the color changes from red or pink to brown, grey, or green.

Bacon isn’t an exception to mold growth. When mold begins to grow on your bacon, that’s an ultimate red flag for spoilage

A foul smell is often a tell-tale sign that your bacon is spoiled and should be discarded.

If you feel your bacon and it has a sticky or slimy feel instead of a tender texture, throw it off.

Read also: How Long Can Tofu Sit Out? Does Tofu Go Bad Or Can You Freeze Tofu?

Chewy bacon vs. Crispy bacon and why we love them

It is hard not to love crispy bacon. They’re an intersection of meaty and crusty. Although they take longer to prepare, they’re still worth it, especially with foods like burgers, where they get to provide extra textural input.

Chewy bacon, on the other hand, is not a very popular choice amongst Americans primarily because of its high-fat content. Still, if you would rather have your bacon chewy, fleshy, and flabby, chewy bacon is.

Is chewy bacon safe to eat?

Chewy bacon is safe to eat if cooked to an internal temperature of about 165°F.